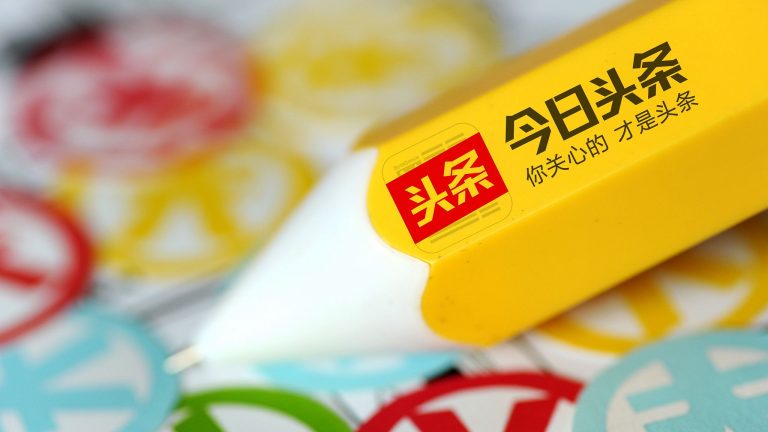 The battlefield of Chinese online shopping has welcomed another strong fighter – Jinritoutiao.

Jinritoutiao has only used three years to be listed and become the tech giant – it is widely believed that social data contributed a lot to the fast pace.

CEO Zhang Yiming hopes the data benefits could be helpful for grabbing a position in the e-commerce market.

However, it is not that easy.

Alibaba and Jindong have been sharing a significant market share in the industry, while the target audience is sort of overlapped with Pinduoduo – another online shopping application widely criticized over interior and fake products.

Can Zhidian jump out of circle?

The application is mainly developed by two blocks: worth buying and worth reading.

On the frontpage of worth buying, products of clothes and daily necessities are categories recommended. In the commercial products’ portal, there are eleven categories including fashion-forward clothes for gentlemen, shoes and bags and automobile-related products.

Generally speaking, the prices range of Zhidian is similar to Taobao Juhuasuan, a group shopping brand belonging to Alibaba. Most of the brands are infamous, with product price no higher than 300 yuan (43.3 US dollars).

So far there are almost 10 products of every category, and the store names are the same “Zhidian Selected”, which means Zhidian is not yet a platform, but a self-run shopping site.

Some products on the homepage of worth buying are labeled as “editor’s pick”, which reflects its possibility to call itself as a content e-commerce service provider. It echoes the worth reading block, which brings news to its users with information flow – very much similar to Jinritoutiao app.

As for payment, cash on delivery and online payment are both acceptable. Notably, only Alipay is allowed at the initial stage.

It seems not surprising at the moment, since the characters are shared by other e-commerce projects at Jinritoutiao app.

However, it is just a diversion tool, since users will be guided to the stores on other shopping platforms after they clicking on the promotion pictures at Jinritoutiao’s recommendation interface. The platforms include Tmall, JD.com, VipShop and Yhd.com – all of them are popular among Chinese social media users and consumers.

Fangxin Shopping, another project of Jinritoutiao, was launched in Septermber 2017. Fangxin means “reassurance” in Chinese.

The project only supports cash on delivery as the payment, promises changes and returns within 100 days. The target audiences are male consumers at their 40s, who can afford mid and low consuming needs with product priced no higher than 200 yuan (about 28.8 US dollars).

Today’s Special and Fangxin Shopping provide similar level of products with Zhidian. They are at a relatively mid and low level, which is widely believed to be match with the consumption ability of Jinritoutiao users.

Jinritoutiao has also provide portal for JD.com since Septermber 2016.

Douyin, a phenomenal short video sharing platform in China, allowed vloggers to link their online stores of Taobao.com in March.

In one word, mainstream online shopping platforms have all presented themselves on the content products developed by Jinritoutiao.

Do reach and engagement mean a good shopping platform?

Tencent’s Paipai.com, QQ.com and Yixun.com are unsatisfying, compared with their strong competitor JD.com.

Pinduoduo is relied on WeChat, as the dramatical growth has strong connection with the accommodative policies of WeChat, low prices and the so-called social media based principle.

Baidu has been failed for many times, as they tried to own a position in the e-commerce market during the past few years.

In 2010, they founded a consolidated company with Japanese online shopping giant Rakuten.com, before setting up a B2C e-commerce platform Lekutian.

However, Baidu Youa closed its online retailing services in March 2011, and transformed itself to a local service platform. Lekutian was also closed later in April 2012.

In March 2012, Baidu Youa was emerged to Ailehuo, and was transformed to a shopping guide website.

Baidu launched online BaiduMall, targeting on mid and high end consumers. The website invited some of the famous brands, and only cooperate with the official.

Nevertheless, the online license of BaiduMall was turned down last year.

Taking data and information as the base, what should Toutiao do? Huxiu.com suggested to transfer all the online shopping businesses to Zhidian, while reducing the function of other similar products to data transfer.

There is also another possibility that Jinritoutiao will be assisted with the capital from Alibaba, which means Zhidian will become a new invested product by Alibaba in a segment market.

Xiaohongshu and Baobaoshu, which concentrate on fashion and mother-and-baby industry respectively, are all representatives of Alibaba’s investment strategy.

It is widely reported that Jinritoutiao will seek for IPO next year. It’s time for them to impress investors.