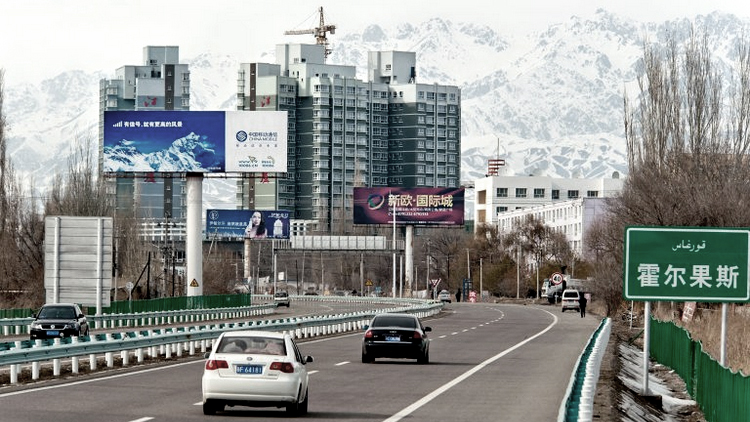 A remote Chinese city has grabbed the headlines, as the so-called Chinese Hollywood has become the storm center of the back taxes scandal of celebrities.
To enjoy the tax beneficiaries, more than 1,600 film and television production enterprises registered in the Horgos, which is located in west China’s Xinjiang Uyghur Autonomous Region.
However, the city has been wiping out from the spotlight, as more than 100 companies’ registration have been cancelling since this June.
The most catchy case falls on Fan Bingbing – the top actress and the companies she represents have been fined for 884 million yuan (about 130 million US dollars) in back taxes and fines in early October.
China’s State Administration of Taxation has launched a campaign to recover all back taxes, saying those who meet the December 31 deadline and pay all back taxes would be exempted from penalties.

Horgos’s Ups and downs
Horgos has a population of about 85,000, with most of them only speak Kazakh, instead of China’s official language Mandarin.
But it didn’t stop at least 30 mainstream celebrities in the country – including Fan Bingbing, Huang Xiaoming and Feng Xiaogang – to register their companies in the border city.
It has also attracted more than 600 production companies to found their subsidiaries there, like Enlight Media, Huayi Brothers and Bona.

The enterprises in the entertainment industry can be divided into three categories:
-Celebrities are the corporate representatives;
-Celebrities are shareholders;
-Subsidiaries of film production companies.

In 2017, 14,472 new organizations were set up in Horgos – a 341 percent growth from 2016.
The prosperity of the city is driven by profits.
It is defined as an economic special zone in 2010, promising to exempt business income taxes for the first five years since the companies’ foundation.
The policy has attracted a flock of companies to move there, followed by another bunch of preferential policies on business income taxes, personal income tax in 2013, and a monetary reward to listed companies, ranging from 300,000 and two million yuan (about 43,375 to 289,171 US dollars).
More than 200 companies transferred 20 million yuan (about 2,889,254 US dollars) profits each to the subsidiaries in Horgos, the Beijing-based financial newspaper China Times reported.
Except for being the “Cayman in China”, Horgos is also the hub of shell companies, which is represented by financial companies for their registration, taxation and accounting matters.
Registration averagely costs each company 30,000 yuan (about 4333 US dollars), according to Chinaso.com. One of the offices has become the registered addresses for more than 100 companies, since it is located near the taxation authorities.
There are signs of the fading out of the Chinese Hollywood.
For example, the refund of business income tax and personal income tax was suspended in January, before a public notice issued in April by national taxation authorities asked companies to stop sharing one address when registrating licenses.
A series of strict inspections came after Fan Bingbing was accused of using “yin-yang contracts” to underreport her income to tax authorities.
Finance authorities said in a meeting held by in March that some of the enterprises registered in Horgos have “violated the intention of the beneficiary policies, doing harm to financial interests of other districts while disturbing local financial order.”
Horgos has a strong competitor in China – Hengdian World Studios. The town in Jinhua City of east China’s Zhejiang Province is the largest film studio in the world, providing shooting bases and scenic spots for fans.
Preferential policies on taxation are also launched in other cities of the country, including Wuxi City in east China’s Jiangsu Province, Qingdao City in northeast China’s Shandong Province, Dongyang City in east China’s Zhejiang Province.

China’s Bigger Picture
Taxation beneficiary policies have become a popular way among local government in China to attract investment, especially among those in the areas with poor financial conditions and infrastructures.
It was a policy which can be traced back to the initial stage of Opening Reform – an economic reform started in 1978, Dr. Zang Jianwen told the Shanghai-based news outlet Jiemian.com. Zhang is a finance major student at Tianjin Finance University.
“The west of China enjoys greater tax concessions than the east, to keep the balance of [economic] development between different regions,” said Tianjin Finance University associate professor Yang Zhenzeng.
China has made several moves on tax preferential policies. The State Council has issued a public notice in 2014, asking to “clean up” policies of this kind.
However, in May 2015, authorities from the same government body asked to continue the preferential policies with a “transition period”.
In January 2017, the body encourages local governments to tout for foreign investment by making preferential policies – it is the first time for China’s central government to lay out preferential policies in an explicit way.
“[The changing policies reflects that] there’s a game of benefits between the central and local government,” Jiemian.com quote analysts as saying.
However, someone disagrees. “We have to push local government stop concessing their interests to make the policy easy,” said Liu Shijin, the vice director of the Economic Commission at National Committee of the Chinese People’s Political Consultative Conference (CPPCC).
China decided to consolidate the national and local tax bureaus earlier this year, offering an opportunity to limit the disorder on preferential policies launched by local governments.
“Local authorities should focus on creating friendly businesses environment,” Zang Jianwen suggested.
The idea was backed by Liu Shijin. “We have a lot to do during the process, including improving human-resource capital and forming creativity-friendly environment.”